<Back to News
MPSERS ORS 3% Update

We have received the following notice from Michigan Office of Retirement Services:

"The Supreme Court has ruled that PA 75 of 2010, which was in effect from July 2010 until September 2012 and mandated that members contribute 3% of their compensation to the Retiree Healthcare Fund, is unconstitutional and that member contributions (which are currently being held in escrow [at ORS]) shall be refunded to members. ORS is working to implement the Supreme Court’s decision..."

ORS, their attorneys and auditors, and Michigan School Business Officials association (MSBO) will be working together over the next many months to figure out how to refund member's contributions.
Now that the constitutionality of the mandatory deductions is finalized, we will now proceed with issuing corrected 2013 W-2s (for the voluntary 3% deductions from 2/1/2013-12/31/2013).
To summarize: 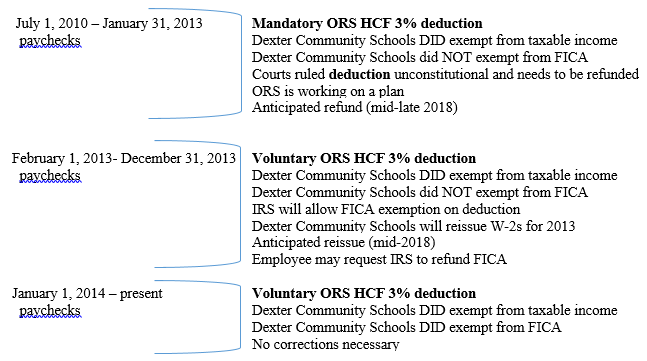