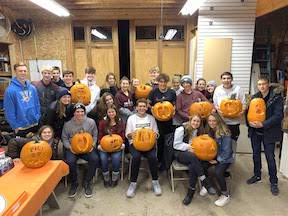 On Saturday, October 19th, sixteen Dexter families waited anxiously at the Detroit Metro Airport for Air France flight 378 to arrive from Paris. Aboard that plane, sixteen French students and their two adult chaperones waited eagerly for the start of their two-week exchange program in Dexter, some on their very first trip to the United States.  Both groups were understandably nervous, but also excited that the day was finally here after many weeks of pre-trip planning and communication.

Madame Jamie Aumend, DHS French teacher and Executive Director of the French American Cultural Exchange Program (FACEP), has organized the French exchange trip for the past four years in partnership with Mill Creek Middle School French teacher, Madame Cheri Sing.  Aumend’s vision for the program is to provide a full immersion experience for students, showing what everyday life is really like in another country.

“We want the language to come to life for the students, beyond the vacuum of the classroom,” Aumend says. “The program is more than just a tour of the country, it’s a chance for the students to share their culture and realize a wider global community.” 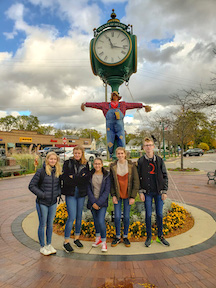 The FACEP is a reciprocal exchange program between an American school and a French school. The French students visit Michigan in late October, staying with a Dexter family during their two-week trip. In June of the following year, Dexter students travel to France to stay with their exchange partner’s family.

The selection and pairing process begins long before the exchange and once paired, students and their families communicate via text, email and social media to get to know one another before arrival. Aumend and Sing do their best to pair up students with similar interests to provide a level of comfort for all involved. Larger group communication between families before and during the exchange is done through WhatsApp, with participants sharing texts, pictures and videos.  For parents with students thousands of miles away, seeing “proof of life” and following their child’s day-to-day activities helps overcome some of the natural anxiety when apart.

During their two weeks in Michigan, the French students attend classes with their exchange partner on some days, while other days the group takes field trips to sights around the area. The weekends are left open for the host family to plan any excursions; some might go to Chicago, others up north to Mackinac Island or maybe to a University of Michigan football game. 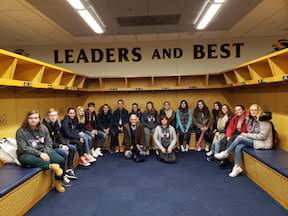 Coinciding with the French visit this year was a similar exchange program between Dexter and Bavarian students.  The Bavarian students arrive a week later than the French, and the overlap between the two exchange programs provides an opportunity for joint field trips and wider cultural exposure for all students involved.  This year, field trips for the combined group of international students were taken to The Henry Ford Museum/River Rouge Factory and The University of Michigan stadium and campus.

An important aspect of the exchange is for students to experience everyday life in another country.  A tour of Dexter, including the fire department and city hall, is one of the first field trips taken by French students. Other 2019 field trips year included the Toledo Imagination Station, Wing Farms pumpkin patch, the Detroit Riverwalk and the Renaissance Center tour.

Coming at the end of October, the timing of the visit offers French students a unique chance to experience Halloween in the United States. Halloween is a holiday in France but is not celebrated to the extent carried out in America. In France, Halloween is mainly for very young children; middle- and high school-age students do not participate in trick-or-treating or other activities.  So, it’s great fun for these students to throw themselves into the festivities here – dressing in costumes for trick-or-treating, carving pumpkins, hayrides and haunted houses. 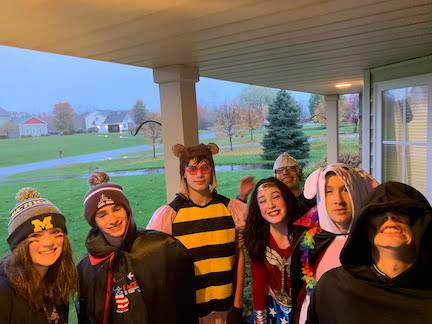 Students in the program, both American and French, highly recommend the program to others.  Speaking with several of the students, all were thrilled to have been a part of the exchange. While a few had previously visited the United States, most were first-timers and thoroughly enjoyed their time in Michigan. When asked their thoughts on America, the most common answer received was that it is “big.”

“Big cars, big houses, big gardens (yards); everything is so big in America,” said Anna Viollet, a French student staying with DHS freshman, Mikala Sposito, and her family. Viollet’s home city is bigger than Dexter, and the houses are much closer together with very small yards. This is her third trip to the United States, and she says she loves the exchange program for the opportunity to meet many different people and improve her English pronunciation.

Another student, Thibault Sosson, also hopes the exchange will help his English language skills.  Sosson is from a very small village in France; chaperone François Cordon described Sosson’s village as, “60 people and 2000 cows.”  Sosson is studying agriculture to be a farmer like his father, and is a competitive horseman back home.  So, it’s no surprise that one of his favorite activities was a trip to the Double JJ Ranch in Rothbury with his host, junior Reilly Trammell, and her family. Taking a spin on the mechanical bull is a memory that will remain forever, especially as Trammell caught it on video and posted it for the group to enjoy.

Theirry Lacroix is also from a small village, and shared that he found America to be everything he thought it would be and more.  Like Viollet, Lacroix was amazed at the sheer size of things in the US, including the DHS Center for Performing Arts where we met.  “We don’t have anything like this at our school,” he said, gesturing to the expansive performance hall.  He and his host, junior Christian Dimo, attended a cold and wet University of Michigan football game, and Lacroix was impressed by the proportions of The Big House.  He enjoyed American football, the differences being it is slower and has many more breaks than soccer or rugby.

Asked separately to relate the biggest differences between French and American school, each student said practically the same three things: 1) the school day is much longer in France (8 am – 6 pm), 2) French school is much more strict and 3) French students have much more homework.  Dexter students may not agree with numbers 2 & 3, but when they go abroad in June 2020, they can see for themselves if that is true.

The French students travelled to America with two FACEP chaperones, François Cordon and Crystal Briard. Cordon is 70 years old, a former school principal who travels three times a year with students on exchange programs.  He has been to American 37 times with students, visiting 18 states, and while he is very fond of Michigan, he is not shy in naming Montana as his favorite state. Cordon loves the nature and majesty of “Big Sky Country,” saying in his opinion it is “true America.”  Viollet was fortunate to have accompanied Cordon on one of the Montana trips, agreeing with him on its beauty.  Sosson has already signed up for a second exchange this year, and will accompany Cordon back to the U.S. in February 2020.

Thanks to this local support, along with the much-valued support of DCS staff and the Dexter community as a whole, French students receive a realistic experience of what everyday life is like in the United States.

Bonus: Here's a link to a slideshow of this exchange!